skip to main | skip to sidebar

I remember my friend today.
I remember her story. 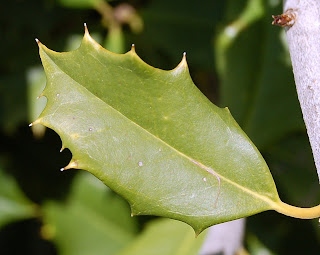 I did not know her as the young newlywed, far from Mother, Sister and doting Aunts.
We were not friends when she was preparing her nursery.
On April 19, 1975, she woke and knew something was wrong.
Her beautiful, full term, baby was stillborn. She named her Holly.
In 1983, my friend told me the story of Holly.

That year the birds had planted a Holly seed on the east side of my house.
It sprouted and a tiny Holly bush began to grow.
I protected this little seedling. 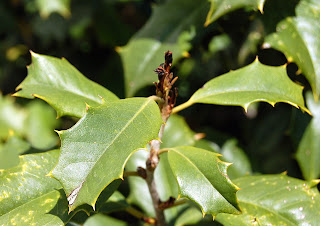 Today the bush is large.
The grow tips were nipped this year by too early of a spring.
It will survive.
It will send out new grow tips. 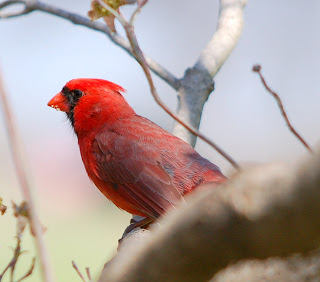 A pair of Cardinals have made a nest in the Holly.
The sharp, piercing leaves provide protection.
The holly bush is sacred in many cultures. 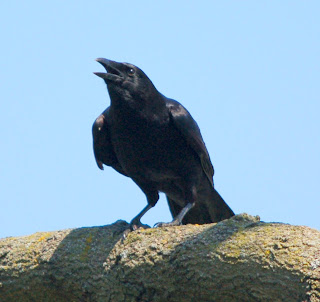 As I was writing this piece a pair of Crows came into the front Maple tree.
Known in folklore as magical birds.
They are symbols of creation and spiritual strength.
Like my friend.
Posted by Q at 12:45 PM

Is there anything sadder than nurturing and waiting for your new baby, and then to lose her before ever getting to know her. How tragic.

I have two hollies in my garden and while they grow slowly, they have survived yet another winter.
I would love them to grow big enough to house a pair of cardinals and their family one day.

Dear Sheila,
Being without support was very hard for her too!
Our other Holly is Blue Maid. It is slower growing than the wild Holly the birds planted. The Blue Maid is also softer! The wild Holly is so sharp it will cut like thorns. The birds love it!
Sherry

As always, Sherry, I am moved by your post.

Your blog has provided some much needed perspective and solace to me today.

Dear Mary,
I am pleased Corner was soothing and comforting for you. One of the reasons I am here, not just here in the virtual world but "here" as an "Earthling". I think it is why we all are here! I believe humans need to C.A.R.E. for each other, the earth and all the creatures, where ever we are! That's my acronym for comfort, appreciate, respect and enjoy!
I do many tributes and I remember my loved one's that have gone before me. Sometimes I remember for and with my friends too.
Always Mother Nature provides me the way to CARE!
Hugs,
Sherry